We dedicate a whole day in February to celebrating love with chocolate and romantic dinners and often romance in the bedroom.   The rest of the year, many couples have resorted to Sleep Divorce and don’t even sleep in the same bedroom.  The most common reason is snoring and sleep apnea.

Carson Daley opened the discussion of sleep divorce when he publicly announced the sleeping arrangements that he and his wife had developed.  He also shared his diagnosis of sleep apnea.

If you and your partner have made the same decision, you are not alone. One in four couples reported sleeping in separate rooms or beds in a survey by the National Sleep Foundation.  But you can make a change. 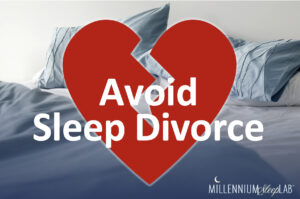 Identifying and treating sleep apnea can eliminate the snoring that is common with the disorder, as well as other sounds of gasping, choking, or just changes in breathing patterns.

Obstructive sleep apnea occurs when soft tissue or tongue falls into the windpipe and closes off the airway.  Then when the body recognizes a lack of air and oxygen, a fight-or-flight response causes a gasping deep breath to reopen the airways.  This can happen hundreds of times a night, disrupting sleep for you and your bed partner!

Treating sleep apnea has traditionally meant a wear a mask connected to a blower, or CPAP, to use slight air pressure to hold the airway open.  Through technological development CPAPs are now small and very quiet, so they don’t disrupt sleep.

Alternative treatments are also available such as an oral appliance made by a dentist to pull the jaw slight forward and keep the airway open.  It’s even less noise and more sexy than a CPAP.

If you are ready to return to bed with your spouse, contact Millennium to schedule an appointment to address your sleep apnea.

Selecting a medical insurance plan can be confusing, and then finding a doctor or medical service provider is often stressful....

Falling asleep and staying asleep is a struggle for many adults. has shown behavioral therapy like relaxation techniques and sleep...