Recognizing the OSA and Obesity Cycle

Sleep apnea and obesity are often seen together, but it is actually a cycle that can be difficult to break.

Obstructive Sleep Apnea effects millions of American adults and is becoming more prevalent each year.  While there are several indicators for OSA, one of the most common is elevated BMI (obesity), especially for middle aged adults.  Losing weight can be effective in reducing or eliminating obstructive sleep apnea. However, sleep deprivation and reduced metabolism from sleep apnea make is difficult to lose weight and can even lead to obesity.   Patients get caught in a cycle of OSA and obesity with no clear beginning and no clear way out.

To understand the cycle, let’s start by understanding Obstructive Sleep Apnea (OSA).  An apnea is a pause in breathing for at least 10 seconds during sleep.  It often occurs when tissue in the back of the throat relaxes and falls down to obstruct, or block, the airway.  However, the obstruction can also occur further down or even a long stretch of the airway.  There are many factors that contribute to OSA, from enlarged tonsils and tongue to muscle atrophy from the aging process, however, body fat (measured as BMI) is a primary contributor.

The weight of the abdomen and neck area presses down on the trachea. Fat deposit in the neck area and even in the muscles around the airway can cause the airway to flatten. Then the negative airway in the lungs after an exhale creates suction to pull the airway completely closed.  OSA is diagnosed when breathing pauses for at least 10s at least 5 times per hour of sleep, on average.  The apneas and arousals from OSA have many negative side effects on overall health. 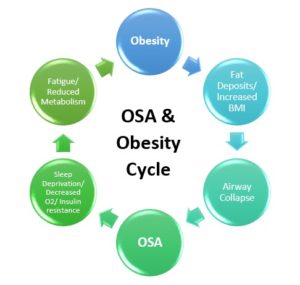 Effects from OSA complete the cycle with sleep and chemical changes that lead to fatigue and lower metabolism causing even more weight gain.   Sleep apnea causes repeated awakening, or sleep fragmentation, that reduces slow-wave sleep and REM.  Unfortunately, slow-wave and REM are the deep restorative sleep that is needed to feel refreshed.  This causes daytime sleepiness often leads to decreased physical activity and even effects mood.

Each time there is a pause in breathing the blood oxygen level drops, known as recurrent hypoxemia and hypercapnia.  With that the body’s autonomic “fight or flight” response triggers a breath with an increase in sympathetic activation and increased blood pressure.  Research has shown that this can lead to other negative consequences of OSA like cardiovascular diseases include hypertension, arrhythmias, stroke.

Additionally, OSA causes hormonal changes with insulin resistance and increased appetite.  Sleep deprivation, even from periodic arousals, causes glucose tolerance that results in insulin resistance.  This increases the risk for diabetes and obesity, and for those with diabetes, it can make it more difficult to control.

OSA has also been shown to increase hormone levels of leptin, ghrelin, and orexin levels.  Leptin usually has weight reducing effect, however OSA may cause resistance to leptin.  In contrast to that, the hormone grehlin which is a known appetite stimulator is significantly higher in OSA patients.  This combination resistance to weight control and increased appetite and caloric intake is a “perfect storm” for weight gain and exacerbating obesity.

Many Americans are caught in this cycle of Obesity and OSA and don’t even realize it.  The signs of OSA include loud snoring, dry mouth upon awakening, morning headaches, heartburn, nocturia, daytime sleepiness, and sexual dysfunction in men.  However, the most important predictor of OSA is obesity, and 60-90% of adults with OSA are overweight.

While, several studies have shown that OSA worsens as weight increases, there is also evidence that treating sleep apnea can assist in weight loss. Treatment such as CPAP or Oral appliance therapy can be the trigger to break the cycle.   Better yet, you can reverse the cycle to continue to improve sleep and lose weight.

If you or someone you love is struggling with OSA and Obesity, you or they may be caught in this repetitive loop.  Schedule an appointment with one of Millennium’s sleep specialist to break out by testing and treating the sleep apnea.

If you have been diagnosed with obstructive sleep apnea (OSA) and your physician ordered a CPAP (continuous positive airway pressure),...

Is It Insomnia or Sleep Apnea?

More people than ever are suffering from sleep disruptions and poor quality of sleep during this pandemic. It’s time to...