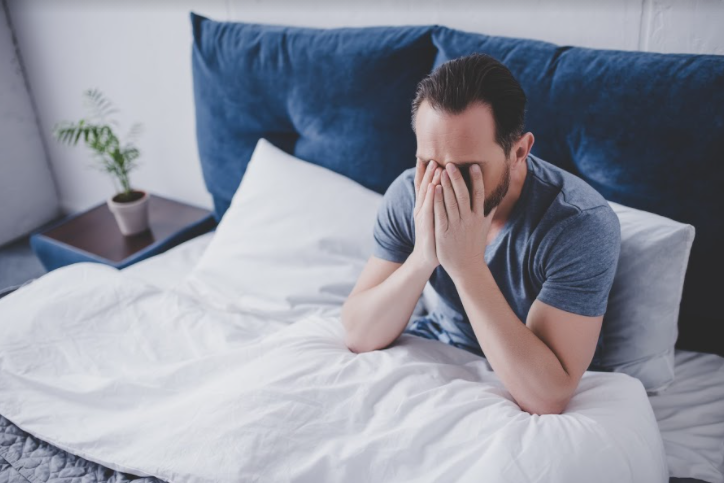 Obstructive Sleep Apnea (OSA) occurs when the upper airway collapses and obstructs airflow during sleep, resulting in pauses in breathing. This is usually accompanied with snoring and often associated with obesity or abnormalities in nasal/oral passages.  OSA can cause other health conditions such as hypertension and should be addressed immediately.  More about OSA.

Central Sleep Apnea (CSA) is different because the cessation in breathing is not due to an obstruction; instead, the brain and central nervous system don’t send the correct signals to the muscles in the chest, primarily the diaphragm, to control breathing. (2)

Central Sleep Apnea is distinguished by comparing airflow with chest movement during sleep.  When a patient is tested for sleep apnea, he or she will wear a cannula tube in the nose to measure the actual movement of air during breathing.  During an apnea (a pause in breathing), the airflow measurement drops.  The patient also wears an elastic belt or motion sensor on the chest to measure chest movement.

Who is at Risk of Central Sleep Apnea?

Central Sleep Apnea is more often seen in patients with congestive heart failure, stroke, or kidney disease.  It can also be caused by high altitude or a medication, usually an opioid such as oxycodone. Other times it is idiopathic – which just means the cause is unknown.

Since it is not associated with snoring or obesity, symptoms of CSA are more difficult to identify. Here are a few symptoms to watch for: shortness of breath or gasping when you awaken, insomnia, daytime sleepiness, mood changes, and difficulty concentrating.

Diagnosis is important, and the American Academy of Sleep Medicine recommends that patient with suspected central sleep apnea be tested in a medical facility, not at home, because of the complexity of disorder and connection to other comorbidities.

However, for patients that don’t have heart failure or stroke, the symptoms are similar to obstructive sleep apnea. Patients are often tested via a home sleep apnea test such as the ones provided by Millennium Sleep Lab.

Millennium reviewed data from the last 12,000 patients tested for sleep apnea, and 5.5% of patients had a central sleep apnea index of 5 of higher (meaning they stop breathing 5 or more times an hour because the brain doesn’t signal the body to take a breath).  More than half of those patient had a central apnea of 10 or higher.

Millennium only tests patients that qualify for testing at home with suspected OSA. However, there were still over 600 people with CSA that could have been misdiagnosed.  This confirms the importance of testing with equipment that is capable of distinguishing central apneas from obstructive apneas by sensing chest movement.

In-home tests can be delivered to patients’ homes for convenience, and Millennium Sleep Lab’s patient educators call or use telemedicine software to assist in applying and starting the test.

Traditionally, central apnea is treated with a CPAP, like with OSA; however, it often requires a specialized PAP device that changes between two pressure levels for inhale and exhale, called a BiLevel device or BPAP.

Some people even need an Adaptive Servo-Ventilation (ASV) device that adapts the pressure on each inhale to maintain a consistent breath pattern and starts a new breath even if the patient doesn’t.  You may have heard about them being used in place of ventilators during the shortage in the COVID-19 pandemic.

A newer treatment option, Phrenic Nerve Stimulation, treats Central Sleep Apnea by working inside the body to deliver stimulation to a nerve in the chest (phrenic nerve) that sends signals to the large muscle that controls breathing (diaphragm).

Without treatment, sleep apnea, whether obstructive or central, can have serious health implications to the cardiovascular system and overall health. Therefore, testing and diagnosis is crucial as treatment can reduce and potentially eliminate the debilitating symptoms.

If you feel you display the symptoms of sleep apnea, even just daytime sleepiness, book an appointment with our Millennium Sleep Lab sleep specialist. We’ll identify your sleep disorder and point you to the best treatment option.

If you have been diagnosed with obstructive sleep apnea (OSA) and your physician ordered a CPAP (continuous positive airway pressure),...

Most of us snore from time to time. It tends to be a partner who first notices your snoring, particularly...

Silent Night? Or Snoring All Night?

Snoring affects nearly 90 million American adults and is a problem among all ages and both genders. About 50% of...