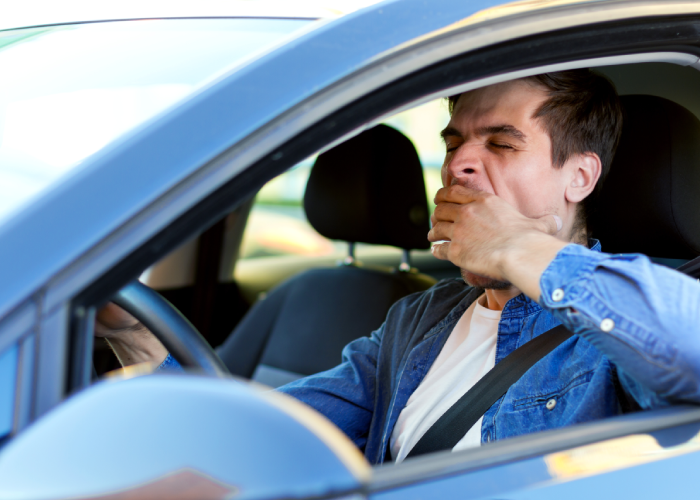 Many Americans report feeling tired all the time or falling asleep in the middle of the day.  They often self-treat with caffeine or vitamin supplements, and they may even have their doctor run blood work to look for a cause.   In the end, the cause may be as simple as lack of sleep, not lack of attempting to sleep, but lack of time actually asleep with the deep sleep the body and mind needs to feel refreshed.

Lack of restful sleep is a side effect of sleep apnea, because several times every hour breathing stops for at least 10 seconds before the body arouses slightly and takes a breath.  The repeated arousals prevent good sleep, even though you may not even know it!

Sleepiness is just one of many hidden symptoms of sleep apnea that is estimated to effect 10-25% of middle-aged adults.  Here are ten signs that you may have sleep apnea:

1. Snoring – The mechanics of snoring and obstructive sleep apnea (OSA) are the same; apneas are just a little more advanced and much more dangerous.  During sleep, muscles relax and the tissue in the throat and upper airway, including the tongue, can fall back into the airway.  Then as air moves during breathing, the tissue vibrates making a snoring sound.  The tissue and tongue fall a little further the airway closes off completed.  The sound stops, but so does breathing!   Without breathing, oxygen levels drop and the body’s autonomic system kicks in to force a breath.  It is often followed by more snoring or gasping for air.  Some people even report a choking feeling.

2.  Feel Tired All the Time – This is called either fatigue or daytime somnolence in the medical community which is a result of the repeated awakenings.  Each time the airway closes off, the body has to trigger a breath which can happen hundred of times a night.  Often the person doesn’t even know it is happening, but each event causes a little arousal and prevents them from ever getting to a deep, restorative sleep.   Sometimes this fatigue is described as an inability to focus or remember things all stemming from the lack of deep sleep.

Many people don’t even realize they are sleepy or fatigued because it has developed gradually and seems “normal” to them.  There is common questionnaire used to score daytime somnolence called the Epworth Sleepiness Scale.

3. Obesity – OSA epidemic closely related to Obesity epidemic, estimated prevalence of adult obesity (BMI >30) in US is more than 30%.   A recent 4 year study showed a direct, linear correlation between OSA.  It showed people with BMI>30 had twice as many sleep problems.  Each unit of BMI increases odds of OSA by 1.14, so even putting on a few pounds increases risk.  Read more about the OSA and Obesity cycle.

4. Age – Some things get better with age, but sleep apnea is not one of them! Studies have shown the prevalence of OSA in elderly as high as 44%.  And for women, the prevalence increases significantly after menopause.  Muscles in all areas of the body atrophy with age, and the muscles around the airway to keep it open are no exception.  This means the airway is more likely to collapse cause a pause in breathing.  BMI is not a good indicator of OSA in the elderly, so anyone over the age of 65 could consider getting tested.

5. Hypertension – 30% of Hypertension patients have Obstructive Sleep Apnea.  The correlation between OSA and hypertension has been known in the medical journals for two decades.  Later research has shown that OSA actually causes hypertension.  Each time breathing stops, the body’s sympathetic system acts to force a breath, and there is a spike in blood pressure.  Unfortunately, that also leads to elevated blood pressure even when awake.  Research has shown hypertension is 2x more likely in subjects with mild OSA, and almost 3x as likely in subjects with moderate to severe OSA.

6. CHF and Arrhythmias – When tested, 37% of Congestive Heart Failure patients were diagnosed with apnea, even without daytime sleepiness.  That is significant, and it indicates that treating sleep apnea should be part of treating heart disease.  Severe OSA patients are also 2-4X more likely to have arrhythmias, such as atrial fibrillation (Sleep Heart Health Study).   Many of these cases are actually Central Sleep Apnea (CSA) instead of Obstructive Sleep Apnea (OSA).  Read more about CSA.

7. Diabetes – Recent reports have shown the majority (more than 50%) of patients with type 2 diabetes also have OSA.  The repeated drop of oxygen levels (recurrent hypoxemia) in patients with OSA has been shown to effect hormone balance and insulin resistance.  In one study, 75% of OSA patients were shown to have impaired glucose tolerance, independent of obesity and other conditions.  Diabetes is another disease that could be better managed by testing and treating sleep apnea.

9. Morning Headaches – Waking up with a headache every morning is common, occurring in 1 out of 13 adults.  However, it shouldn’t be ignored, since it may be caused by sleep apnea.  In one study, 29% of patient with sleep apnea had morning headaches.   The morning headaches can be preventing by treating the sleep apnea with CPAP or oral appliance, and it will also prevent other risk factors of OSA such as high blood pressure and diabetes.

10. Bruxism – This is the medical term for clenching the jaw or grinding teeth.  Strangely, it is common with obstructive sleep apnea.   The exact reason for the connection is unknown, but it is suspected that the sleep apnea causes arousals and stress.  Then once awake, the body’s response to the stress is clenching or grinding.  Your physician may not ask about bruxism, but if your dentist mentions it, consider a sleep test, especially if it is combined with any of the other signs above.  Both conditions can be treated with an oral appliance.

These ten signs all point to the possibility of Sleep Apnea, some more strongly that others.  Having even one sign is worth getting tested and treated before other symptoms develop.  Sleep apnea can be diagnosed with a Home Sleep Test (HST) done in the comfort of home.  By having one of the conditions discussed above means insurance will the cover the test.  Millennium Sleep Lab can schedule a time for you get tested and even connect you with one of our physicians trained in sleep medicine to discuss treatment options.

Is It Insomnia or Sleep Apnea?

More people than ever are suffering from sleep disruptions and poor quality of sleep during this pandemic. It’s time to...

In support of The National Sleep Foundation’s (NSF) campaign to prevent drowsy driving, we are highlighting the dangers of #DrowsyDriving....