Is There a Link Between Sleep Apnea and Sinusitis? 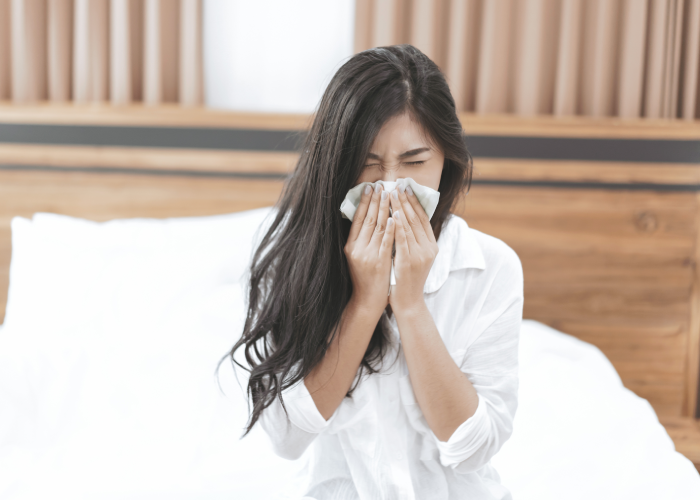 Sinusitis is a condition which blocks the nasal passages, whereas sleep apnea is a disorder in which airways are blocked. While these are distinctly different health conditions, both impact on the quality of sleep.

These conditions share some similar symptoms, such as snoring, and each needs to be treated sooner rather than later to prevent chronic sleep loss. Prolonged periods of sleep deprivation negatively impact cognition and the immune system.  Sleep apnea can even lead to serious health complications, including heart disease, type 2 diabetes, and stroke and obesity.

Obstructive sleep apnea (OSA) is the most common form of sleep apnea. While OSA is not a temporary condition, it is manageable once diagnosed. Sufferers of OSA experience breathing difficulties while they sleep — due to a narrowing of the airways when the throat muscles relax overnight. This leads to a drop in oxygen levels in the blood, with the brain prompting the body to awake for air.

These interruptions to sleep (“apneas”) can be frequent throughout the night, and over a period of time this lack of sleep can have serious implications.

The main symptoms include:

People with OSA do not achieve a state of deep sleep and the accumulating sleep deprivation may affect both personal and professional lives.

This is a temporary health condition and results from inflammation of the nasal passages. The sinuses are cavities in the bones around the nose, and they produce mucus. Alongside the hairs which line the sinuses, mucus helps to prevent pollutants and bacteria from being inhaled through the nose and in to the lungs.

Mucus naturally drains away through the nose and mouth every 10 minutes or so, helping to keep the airways clear.

However, if the nasal passages become swollen due to an infection, or possibly from an allergy, it can prevent the mucus draining away. This leads to a blockage and a build-up of bacteria in the nasal passages, and ultimately inflammation. With the nose blocked, this forces you to breathe through the mouth. This will usually clear within a couple of weeks, but a chronic case can last up to eight weeks if left untreated.

The main symptoms include:

While both health conditions can impact on the quality of your sleep, researchers have tried to establish whether there is a link between the two.

Although there are similarities in some of the symptoms as well as the impact on sleep, a clear link between the two conditions has yet to be established. One of the best-known studies to look at any correlation between these two sleep conditions published their findings in Scientific Reports.

This 2016 study involved 971 people with OSA and 4,855 people who did not suffer with OSA. Over the course of five years, the study found that while just 2% of those without OSA experienced sinusitis, this only rose to 7% for those with OSA.

Therefore, the study researchers concluded there was not enough evidence to link the two conditions — and that having one did not necessarily mean you were likely to develop the other.

Although there is no strong evidence to link the two heath conditions, blocked sinuses which hinder sleep may worsen an existing sleep apnea condition.

Similarly, if someone’s sinus condition is left untreated and becomes chronic, then it could increase the potential risk of developing OSA. Yet the only consistent link at present is both conditions can have a detrimental effect on sleep.

Sinus blockages are temporary, while OSA is a health condition which must be continually managed.

Sinuses will often clear by themselves within a week or two.  If not, medication may be required which could be a simple over the counter antihistamine or in some cases a prescribed antibiotic or steroid. Once you have treated and cleared a sinus problem you will also remove its temporary barrier to having proper nights of restorative sleep.

If you are prone to sinus problems then you may need to address the potential cause. Three of the more common causes are:

Obstructive Sleep Apnea on the other hand require ongoing treatment to prevent symptoms and attain quality sleep.  For mild OSA, lifestyle changes will usually be recommended along with a mild treatment such as an oral appliance or positioning pillow. Since there is a link between OSA and weight, increased exercise and a healthier diet may also be recommended.

People with moderate to severe OSA will likely be recommended to start using a Continuous Positive Airways Pressure (CPAP) device. CPAP involves the supply of air through a mask worn while sleeping, which helps prevent the narrowing of the upper airways and the resulting breathing difficulties. By keeping the airways open the body is not prompted to awake for air and sleeping patterns improve.

AS CPAP involves a mask and connecting tubing it is important to regularly clean the parts and change the filters. This is a simple process and one which can become part of the daily routine. Most modern CPAP devices also come with a humidifier, which once again should be regularly cleaned.

Mold from a poorly maintained humidifier could cause respiratory issues, such as sinusitis.

Consider if sinusitis or sleep apneas if the cause, or maybe both.  While there is no established link between the two conditions, a combination of them both can lead to a lack of sleep. If this is allowed to persist it increases the risk of developing serious health problems. Treating any sinus issue will help with the treatment of OSA, but you should always consult your doctor if concerned about your sleep.

Need help sorting it all out? Our sleep specialists are available to answer all your questions, to help you get the good night’s sleep your body needs.

Most of us snore from time to time. It tends to be a partner who first notices your snoring, particularly...

Positional Therapy for Treatment of OSA or Snoring

Bed partners of snorers often master the old trick of using an elbow to encourage rolling over. I’ve even heard...