Sleep Disorders can Contribute to or Mimic ADHD

Research suggests that sleep testing should be a part of ADHD assessment and management in both children and adults. 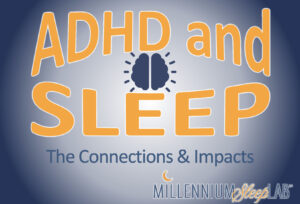 Attention-Deficit/Hyperactivity Disorder (ADHD) is a condition that commonly diagnosed in children with trouble focusing, impulsive behavior, and an energy level that they can’t stop moving. Educators and scientists have referred to ADHD as a national crisis and have spent dedicate time and money in researching causes and treatment.  The condition does not just effect children, many adults struggle to manage ADHD in their work environment.

A growing number of researchers propose that a large percentage of children are not getting duration of sleep they need, either because of sleep habits and sleep disorders, see more on needed sleep times.  Lack of sleep in kids can cause difficulty focusing and even hyperactivity that contribute to or mimic ADHD.   The hyperactivity is not intuitive, since a lack of sleep in adults usually results in daytime sleepiness, but the response in children is often different.  The theory has been gaining momentum in with several studies suggesting links between ADHD and the sleep duration, quality, and bedtime.  One of the first studies on the topic showed 50% of children with ADHD had signs of sleep-disordered breathing, compared to only 22% of children in the control group.

Another study confirmed the link between ADHD and sleep disorders, including obstructive sleep apnea (OSA), restless leg syndrome, narcolepsy.  This study looked and both children and adults, and it suggested that a sleep study be done as part of the initial assessment of ADHD to rule out sleep apnea as cause of the symptoms, but also to eliminate contributing factors to the inattention, executive dysfunction, and hyperactivity problems.

Managing ADHD often require of combination of treatments including medication, therapy, habits, food choice, and treating sleep disorder.  In children, a common cause of sleep apnea is enlarged tonsils and adenoids. The findings of a large population study confirms that ADHD symptoms are related to sleep disorders and shows the symptoms improve after adenotonsillectomy. This is another reason that patients with ADHD symptoms should be screened and tested for sleep disorders, even before considering medications the ADHD.  While sleep testing in young children is traditionally conducting in a hospital setting, adults and most teens can be tested and diagnosed with sleep apnea with a simple home sleep test (HST), and it is sometimes used to screen younger children.

To learn more about evaluating sleep as part of ADHD management, Millennium Sleep Lab can connect you with one of our sleep specialists.

This is our last “SLEEPtember” post as September has now come and gone. Although the #ASAAbedhead and #sleeptember #MillenniumSleepLab campaign...

DROWSY DRIVING – Are you putting yourself in danger?

The National Sleep Foundation (NSF) has designated the first full week in November (this year Nov 4-11 2018) as National...

The current pandemic is understandably leading to anxiety and fear for many people, who are not only concerned about their...