Importance of Sleep in Prevention and Management of Alzheimer’s

Dementia is degenerative brain condition that affects over 50 milling people internationally, with over half of the cases being Alzheimer’s.  The condition is difficult to live with, witness, and care for.  While medical research is still needed on the disease, there have been studies that clearly show the importance of sleep.   In fact, sleep plays a role in each stage: early prevention, late prevention, and management. 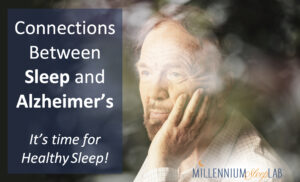 The amount sleep time in the “middle age” years can impact risk of dementia later in life.  Specifically, sleeping less than six hours a night in midlife can raise the risk of dementia — the loss of cognitive functioning, like thinking, remembering and reasoning — by 30%, according to a study.  The report compared data from 7959 participants in a research study that had been followed for at least 25 years.  It looked at the association between sleep duration and incidence of dementia (521 diagnosed cases).  At the 25-year follow-ups, there was a higher dementia risk for participants that had sleep duration of six hours or less at ages 50 and 60, compared with a normal sleep duration of 7 hours.

Reduced sleep time could just be from poor sleep habits such as going to bed late, drinking alcohol, or watching screens before bed.  However, short sleep time could also be caused by a serious sleep disorder.  Undiagnosed sleep apnea or a similar condition can prevent deep sleep, but it also disrupts sleep with brief awakenings, leading to shorter actual sleep time.  This supports a correlation between undiagnosed OSA and dementia.

The amount of sleep and the time people go to bed in later years can also change the risk of dementia, but in almost the opposite way.  Specifically, older adults that slept more than 8 hours had a 69% higher risk of developing dementia than those that slept 7-8 hours.  And those that went to be before 9pm were twice as likely according to a recent study.

These prolonged sleep times are associated with faster cognitive decline.  If you or a loved one reports sleeping more than 8 hours, consider having cognitive function evaluated and changing lifestyle.  Since prolonged time in bed could be related to sleepiness from poor quality sleep, a sleep evaluation could also be considered.

Sleep disorders, such as sleep apnea, are common in older adults, but are even higher in those with dementia.  Specifically, 25% of people with mild-moderate dementia suffer from sleep disturbances and 50% of those with severe dementia.  They may experience daytime sleepiness, insomnia, frequent awakening, and even “sundowning”, confusion and agitation at night.

This week is all about Sleep Awareness!!! Many in the sleep industry are joining  The National Sleep Foundation‘s campaign to...

Obstructive Sleep Apnea does more than make you tired, it is now linked to high risk of cancer. In the...

The Connection Between Sleep Apnea and Allergies

If you are wondering why your sleep apnea symptoms are worse during the fall, there is a good chance that...